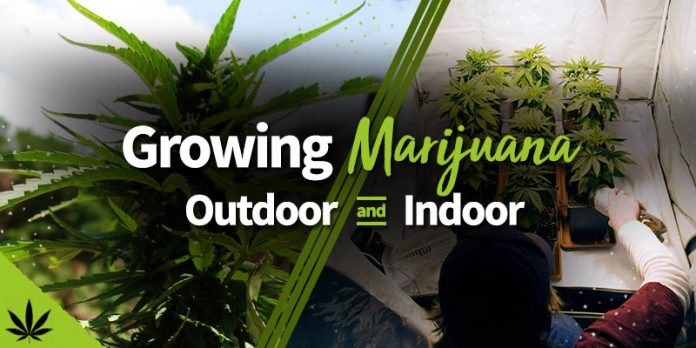 For centuries, cannabis has been grown outdoors. Although many people think of marijuana as being grown indoors, this is something which has only been done for under 100 years. In fact, indoor growing was only invented due to prohibition. The majority of the advancements made over the years in cannabis cultivation have come about due to the need to protect growers for legal action.

With advances in technology, there has been a rapid expansion of cannabis knowledge, and this also holds true in places where cannabis is grown outdoors too, in states like California and Oregon where marijuana was already legalized. But what are the differences between indoor and outdoor growing? How can the growing environment affect different strains, and what do you need to consider when choosing whether to grow outdoors or inside?

It’s no surprise that so many people prefer to grow cannabis plants indoors rather than outdoors. You can choose your growing location without having to worry about constraints, and, of course, you can have complete control over your growing environment. You can control your light sources, temperature, humidity and carbon dioxide production to create a very stable habitat that optimizes the growth of your plants without risking the elements outdoors. Growing outdoors requires a suitable climate with warm nights, hot days, low humidity and plenty of sun exposure – something which not every location can boast. However, while it’s easier for indoor growers to produce pristine flowers that have a high percentage of THC, there are no bulbs which are capable of producing an identical light spectrum to the sun. This means indoor growing spaces produce plants which are less vigorous and which produce a smaller yield.

The Complications Of Indoor Growing

Although indoor growing comes with a host of advantages, there are some downsides too. If you try to recreate the natural environment inside your home, there are some natural factors which are unable to be replicated. Plants which are grown outdoors have natural predators which can control the mites that often infest the plants. Ladybugs, ants and wasps are nature’s helpers and can keep the mite population at bay in the great outdoors, but inside, you have to find other ways to eradicate the pest problem. When mites infest an indoor growing space, it can be extremely difficult to control them, especially now that insecticide and pesticide use is unpopular.

Which Is Cheaper – Growing Indoors Or Outdoors?

Growing either outdoors or indoors requires a substantial initial outlay, however in the long-term, the differences become more apparent. An indoor climate control system will cost a lot to operate, however in outdoor grows, most of the expense involves setting up the operation in the first place.

There are also drastically different labor costs involved in growing outdoors and indoors. Indoor gardens require constant tending, with pruning, feeding, watering and harvest work being a lot more demanding for a smaller yield. In an outdoor grow, a single crop is worked through the season and the output is larger. This means fewer workers can handle the grow.

Yet, although growing cannabis indoors has higher ongoing costs, the year-round harvest and the higher potency of the resulting crop can offset the financial differences. Also, an indoor environment allows different strains to be cultivated which would not be suitable for growth outdoors.

Which Is Higher Quality? Outdoor Or Indoor-Grown Cannabis?

Many people recognize that indoor-grown cannabis is higher quality. Since it’s possible to control the growing environment more effectively, strains can be produced that are not only aesthetically pleasing but also have an impressive flavor profile. By introducing a higher carbon dioxide level into the natural environment, bud growth can be increased, resulting in levels of THC which are hard to replicate outdoors.

Also, since cannabis that is grown indoors doesn’t have to face wind, rain or natural elements which could damage outdoor crops, the buds stay in perfect condition, only beginning to degrade after handling begins. Most indoor grow operations are on such a scale that crops can easily be harvested when in peak condition and the product can be cured within a well-controlled climate.

On the other hand, although outdoor-grown cannabis may be at the mercy of the environment’s whims, and its end product might not appear so physically perfect, the aroma, taste and effects should all still be equally good. In fact, some consumers prefer organic cannabis grown outdoors to the indoor alternative.

The Environmental Impact Of Indoor Vs Outdoor Growing

When cannabis growers wish to minimize their impact on the natural environment, growing outdoors is always a better choice. When cannabis is grown indoors, a huge amount of energy is consumed. A study carried out in 2001 actually discovered that growing cannabis indoors was responsible for 1% of America’s entire energy supply. This is a surprisingly high percentage. Around $5 million-worth of energy is needed to power cannabis indoor grows nationwide – the same as would be required to power two million homes.

With indoor cultivation using as much energy as three million extra cars on our roads, it’s clear to see the amount of energy indoor grows really consume. If growers want to help the planet, outdoor growing is the best option.

In recent years, commercial greenhouse cannabis farming has emerged. This strikes an excellent balance between indoor and outdoor growing. Growing in this way produces quality results with the best of both worlds. This development could be the way forward in the future.

Although there is an ongoing debate about whether indoor or outdoor cannabis cultivation is best, it’s obvious that there are pros and cons of both methods. If you’re thinking about growing your own marijuana, you need to choose the best option for you. After all, not everyone has sufficient outdoor space or the right cultivation environment to suit an outside growing operation. Some people are also still living in areas where marijuana use is illegal. In such locations, the only option available is an indoor grow room. Whichever method you end up choosing, if you use the right cultivation methods and care well for your crop, you’re sure to end up with an impressive final product.

How to graft multiple strains on one Marijuana plant 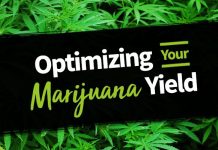 How to increase your Marijuana plant yield – Topping, Pruning, SOG, and more

How to grow your own Marijuana seeds