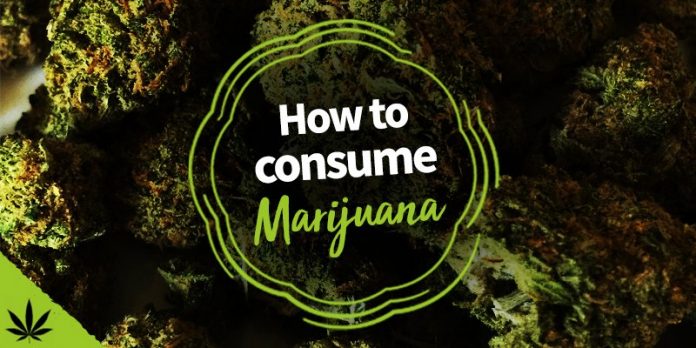 When using cannabis, one major consideration is the method of delivery. Although some people think that the only option is smoking marijuana, in fact there are lots of other options open to users today. Each delivery method comes with its own physical and mental benefits, pros and cons, and therefore it’s important to choose the right one to suit your unique needs and requirements.

Whenever marijuana is inhaled, its compounds will enter your lungs before being absorbed into your bloodstream. As it doesn’t need to go through the body’s digestive system either, the effects are very rapid comparing to other methods.

Currently two inhalation methods exist – vaporizing marijuana and smoking marijuana. While smoking is the most traditional, more people these days are opting for vaping since it is widely believed to be a healthier choice.

Smoking and vaporizing are the easiest and speedy ways to feel the effects of cannabis, and this is why both are popular. However, the effects experienced are shorter-lasting than from some other delivery methods.

Smoking a joint is the most traditional way to consume marijuana, however there are numerous other ways in which it can be inhaled.

Hand pipes are commonly used because they are convenient, portable, easy to use and small. They work by concentrating smoke produced when burning marijuana and this smoke is then inhaled.

A water pipe is a different variation on the pipe. Bubblers and bongs are the two most common types of water pipe and come in many designs and styles. The water cools down the smoke, which makes it smoother and more pleasant to inhale.

The joint made by rolling cannabis in rolling papers is another very common option. Sometimes, users add tobacco to their joint for a different flavor and for the combined effect of the cannabis and nicotine, however with the many health concerns surrounding tobacco cigarettes this is becoming less popular.

Inhaling the smoke directly without cooling it is what makes most first users cough. The hot smoke of a marijuana joint is very hard to inhale, same as smoking a cigarette for the first time – it takes some practice to get used to. Taking smaller puffs of smoke and inhaling air right after makes things easier. Smoking marijuana with a pipe also offers a longer way the smoke has to travel from combustion to inhalation, which adds to the cooling effect.

If you’re keen to try a healthier way to inhale cannabis, a vaporizer is your best choice. Vaporizers heat the herb steadily to a high temperature which is sufficient to extract the cannabinoids like CBD and THC but not so high that combustion occurs, which releases potentially dangerous toxins. This minimizes the risks and side effects which are linked to smoking. Vaping marijuana also reduces the odor associated with smoking marijuana and with so many different types of vaping device on the market, there are lots of options to suit all types of users.

By not pushing the temperature so high, you are inhaling a vapor with all the same beneficial compounds, but nowhere near as hard to inhale as from a classical joint, and without the bad stuff linked to inhaling smoke. If you’re starting out and can afford a vaporizer, you will have a healthier and easier first experience, and you will be able to focus on the effects of marijuana on your body and mind, instead of having to deal with the nuisances of first time smoking.

Users can choose from both portable and desktop vaping devices, depending on the experience that they want to enjoy, as well as devices which are designed to be used with dry herbs, concentrates or with sufficient versatility to allow both to be used.

Concentrates come in several forms including waxes, shatter and oils. Oils usually come in either re-filled or refillable cartridges while waxes and shatter are applied to the device manually and vaped. Dabbing is another option for inhaling concentrates. This form of vaping involves the potent concentrates being dropped onto a hot nail which then creates a vapor to be inhaled. As concentrates are more potent than flower, and produce fast-acting relief, they are ideal for anyone who requires a more powerful solution to treat medical conditions like chronic pain.

Oral delivery of marijuana involves administering it by mouth. There are numerous oral delivery options including ingestible oils, infused drinks, foods and tinctures. Although some oral forms of delivery like infused drinks and edibles require the cannabis to be passed through the digestive system before it enters the bloodstream, this isn’t always the case. For example, tinctures are topically applied under the tongue and are absorbed immediately into your bloodstream. This means that tinctures are faster acting (although not as rapid as inhalation methods) when compared to edibles. Edibles can take a longer period for the effects to be felt however the effect will then last longer – ideal for anyone who needs long lasting relief from a medical problem.

These liquid cannabis extracts are ideal for anyone who needs a fast-acting effect and effective dosage control with none of the unwanted health risks linked to smoking. The user puts a few drops under their tongue and it will then be absorbed into the bloodstream through the tissues rather than being swallowed then digested.

Marijuana oil bridges the gap between a concentrate and an edible. You swallow them and digest them in the same way as an edible, however their consistency is the same as oil. Sometimes, they are taken as an oil in its pure form but sometimes they are put in capsules which are easy to take. Although the effects take longer to kick in, they last longer than those from vaping or smoking cannabis. It is also very discreet and easy to achieve even in public.

Drinking and eating gives a very different effect when compared to vaping and smoking marijuana. The onset of the effect takes longer to be felt, however the effects are more powerfully psychoactive, affecting the entire body. There are lots of infused food and drink options. Although the classic form is brownies, in fact with cannabis infused oils or butters, it’s possible to make a very wide range of foods.

Topical marijuana delivery involves applying a cannabis extract onto the skin. Topical products utilize a full cannabis extract which is a thick decarboxylated oil with active cannabinoids that are absorbed through the surface of the skin. When cannabis is applied topically, the effects are very different. There is no euphoric high or cerebral stimulation. This makes topicals ideal for anyone who needs localized relief to eradicate pain from arthritis or muscle aches, and who don’t want to experience any psychoactive effects.

These are the main ways in which cannabis can be delivered to the human body. All are equally viable and effective, although each produces very different effects. It’s important to understand the differences between them in order to determine which is the best option to suit your needs.

If you are starting out and don’t know what marijuana consumption method is right for you, try one of the inhalation methods first. These methods are easy to come by, simple to use, and offer a shorter-lasting effect. If you don’t like the effects, your head and body will clear up way faster than the other methods so it’s perfect for somebody who just wants to test the effects for the first time.

Before deciding if you like the effects of cannabis or not, keep in mind that the strain of marijuana you use greatly influences the effects it will have on your body and mind. For somebody new to marijuana, consuming two totally different strains will feel like a totally different experience. Try different strains and find one that gives you the high that you like – people usually love some strains and dislike others, it’s really not just all the same marijuana.