Home Learn What is Marijuana? What is Hemp?
Facebook
Email
Print 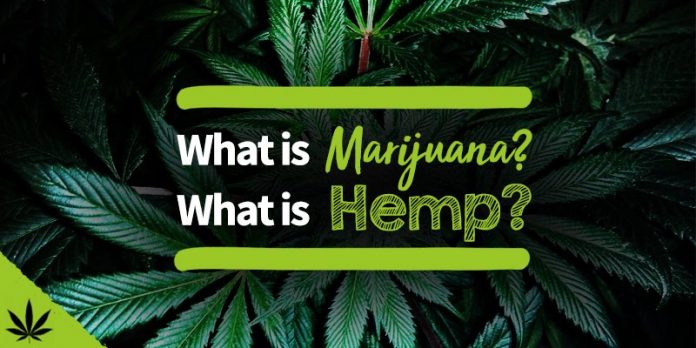 Due to the bad publicity that marijuana has had over the last few decades, it’s no wonder that a lot of people still have a very poor understanding of this very useful plant.

Unfortunately, despite the research that is ongoing into the benefits that the cannabis plant can offer, there is still a lot of confusion and misinformation out there about marijuana. Many people are completely unaware of the distinctions between the two main species of the cannabis plant – marijuana and hemp – and a surprising number of people still think that they are the same thing. One of the main problems is that often the terms are used interchangeably, which has led to even more confusion about how the species differ from each other. So, what are the similarities and differences between the cannabis that gets you high and hemp? In this article, we take a closer look at each plant’s chemical makeup and the different benefits they can provide.

Before we go any further, it’s important to be aware that Marijuana and Hemp are definitely not identical. The cannabis plant family has two main classifications – sativa and indica. Marijuana and Hemp are both different cannabis species and both belong to the Cannabis Sativa family. Since both types of plant come from the same family, they have some similarities in common. Yet, because each plant has its own unique biological structure, there are also a number of very distinct differences which are vital to understand.

The Anatomy Of The Marijuana And Hemp Plants

For many people, the marijuana plant and the hemp plant can easily be mistaken for each other. However, for anyone who knows what they’re looking for, each of the two plants has its own clear distinctions.

The marijuana plant has dense buds, a bushy, short appearance and broad leaves. In direct contrast, the hemp plant has skinny leaves which are mainly concentrated at the plant’s top. Hemp also grows skinnier and taller than the marijuana plant and has very few branches under its upper part.

If you look at both plants together, it’s possible to easily identify the differences. As we look more closely at the anatomy of each plant, you’ll also see that there are major differences when it comes to their chemical composition.

The Composition Of The Marijuana And Hemp Plants

Cannabis contains many different compounds known as cannabinoids. While there are lots of these, the two best known and most dominant include CBD or cannabidiol and THC or Tetrahydrocannabinol. Both of these cannabinoids have been demonstrated to offer impressive wellness and health benefits to humans, but THC has a major noticeable difference in that it causes psychoactive effects (or produces a euphoric high) while CBD has no psychoactive properties at all and produces no high.

If you’re looking at the differences between Marijuana and Hemp, this is the major distinction. Hemp only contains a very low THC concentration of under 0.3% whereas Marijuana has a high THC concentration of around 15% up to 40%. For this reason, primarily Hemp is grown for industrial purposes. Marijuana, conversely, is cultivated for medicinal and recreational use.

The Usages Of Marijuana And Hemp

As marijuana has a high THC content, it is primarily grown for the psychoactive effects it can produce. It may be grown for either medicinal use or for recreational purposes. You can inhale, smoke or ingest marijuana directly, and THC can also be extracted from the marijuana plant and the used in several ways from edibles and capsules to vaping. On the other hand, hemp is used primarily for industrial reasons. It can be used to produce countless vital resources like clothing, paper, bio fuel, building materials, oils and food products.

However, now that CBD is becoming more recognized around the world for its potential health and wellness benefits, hemp is now also being grown to make an increasing number of CBD products which are free from psychoactive THC, and are legal in most parts of the world.

The Legality Of Marijuana And Hemp

Whether or not THC is present doesn’t just play a major part in the way in which the marijuana and hemp plants are used, it is also a key factor in determining whether each plant is legal or not. Different countries and states have their own laws regarding the sale, use, cultivation and transportation of hemp, however these laws usually depend on whether it contains any THC.

In many areas, the permitted hemp THC content to be allowed as legal stands at either 0.2% or 0.4% depending on region. As hemp contains little THC naturally, it is legal around more areas in the world. Even when it isn’t legal, the consequences under the law are often minor when compared to the consequences for possessing or using THC containing products. Hemp is often legal in areas where marijuana is not.

As marijuana has a high level of THC, it remains illegal in many areas of the globe. Marijuana remains illegal in many parts of the USA too, although an increasing number of states now allow its use legally for medicinal and sometimes recreational purposes. Other countries around the world are also now legalizing marijuana either fully or partially, although more frequently for medicinal use than for recreational use. There are increasing moves in this direction and the many medicinal and economic benefits that marijuana is able to provide are now being more fully recognized.

The legalization of cannabis is not just about people getting high, as most people still think of when hearing the word marijuana. Although recreational smokers have been defending the plant for years, one major reason for legalization is the plants medicinal properties. While the plant was illegal and scheduled as a very dangerous substance for people to consume, it was hard to get permits to study it in laboratories as well. This is why it took so long to finally hear some actual studies being done to assess its dangers and benefits. Because it was proved again and again that the dangers of consuming the plant are minimal compared to other addictive substances that we can get legally, we now see more and more states and countries making it legal in some form or another.

As you can now see, there are some major differences between the hemp plant and the marijuana plant, and the two names certainly should not be used interchangeably since they are distinct plants, albeit from the same plant family.

Marijuana and hemp both have very different chemical properties and produce very different effects when used by humans. Therefore, it’s important to be aware of these differences. The more information is spread about the differences between the two plants, the more knowledgeable the general public is about the various benefits that each plant can provide and there is also less stigma attached to both plants as knowledge slowly grows.