Home Learn What is the difference between Cannabis Sativa, Indica and Ruderalis
Facebook
Email
Print 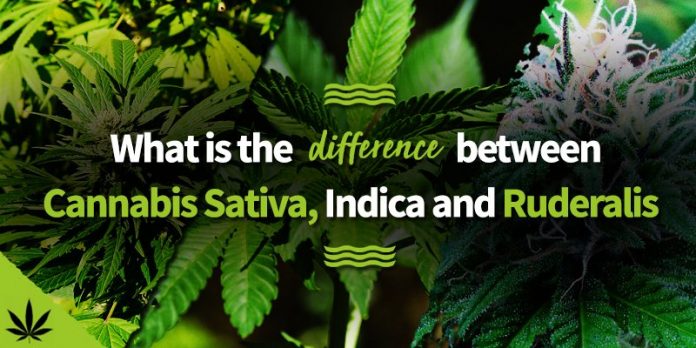 Originally, all cannabis plants were described as being Cannabis Sativa L. However, since then, it has been discovered that there are differences between different plants’ growth, appearance and composition. While there is, obviously, a difference between cannabis and the hemp plant, there are also clear differences between Cannabis Sativa, Cannabis Ruderalis and Cannabis Indica plants. All the modern species we know today are traceable back to these subspecies.

These days, not only do growers cross all the most desirable properties of various plants to create hybrids but hybridization can also occur in nature. This makes it hard to distinguish between different plants, and the pure strains from which all modern cannabis originates are now increasingly rarely found.

Sativas grow to be the largest of all cannabis species, growing to a height of up to four meters (~13 feet). When consumed, Sativa produces cerebral effects with a potent and long-lasting high. Their large shrubs yield larger harvest, however with some varieties blooming for as long as 16 weeks, patience is definitely required.

Cannabis sativa originates from tropical regions and particular from equatorial zones. Wild species of Sativa can be found in Central America, Central Asia and Central Africa where the environment is typically humid, densely vegetated and warm, with consistent environmental factors through the year. Sativas have adapted well to that kind of climate. Its extra height enables it to reach the light while its finer fingers on its leaves are adjustments made for high humidity areas. Sativas also have buds which are looser and lighter to avoid moisture issues.

Sativas usually have a high THC concentration with a lower CBD content. When consumed, it produces a cerebral high with minimal physical effects. Most users describe Sativas as inspiring, energizing and euphoric, with many users reporting improved appetite, mood, focus and energy.

Indicas are more compact and grow smaller than Sativas. When consumed, they are well-known for providing a strong physical effect and calming the mind. A pure Indica will look similar to a small Christmas tree, growing to a maximum height of around 1.5 meters (~5 feet). Once the indica plant has grown to its correct height, it puts its energy into producing aromatic, resinous and compact buds. Indicas also have a shorter flowering period of around 6 to 8 weeks.

Indicas are generally found growing in arid and dry mountainous regions like India, Afghanistan and the Lebanon. These areas have wild fluctuations in temperature and daylight through the year. Since Indicas stay compact, feature broad fingers on their leaves and produce more resin, they’re capable of maximizing their brief growth period within their natural environment.

Typically, Indicas contain a moderate THC level, with relative high amounts of CBD. This makes Indicas a good choice for medicinal use. Most Indicas produce a traditional couch-lock, with mental relaxation and reduction of anxiety and stress as common effects. Users feel stoned and experience relief from pain and muscle tension. Often, Indicas also improve the appetite.

The Ruderalis only grows to a maximum of around a meter in height, making it the most diminutive of the three cannabis species. They also produce smaller flowers. As Ruderalis plants only produce a low yield and have a low cannabinoid content they have been unpopular with home growers for some time. Historically, however, Ruderalis plants were used for both recreational and medicinal purposes and has been used to make fibers with the seeds being used to feed birds and animals.

Ruderalis species occur naturally in northern regions. Wild species can be found growing in colder prairie regions in Poland, Russia and China. Ruderalis has been adapted perfectly to growth in a cold and harsh environment with a short growth period. Therefore, these plants are very resistant and flower rapidly without dependence on light. The majority of Ruderalis species are able to complete their full growth cycle within just three months. While most Ruderalis species produce almost no effects, some varieties have high levels of CBD.

Most strains these days are hybrids. Growers cultivate their plants carefully to produce the best possible hybrid and this means that most marijuana plants don’t fall into a distinct Indica, Sativa or Ruderalis category, but rather ranges across the spectrum between all three.

Different types of hybrid bring their own advantages which depend on why you want to grow cannabis and the climate in which you’re growing. The entire point of growing hybrid plants is to obtain the optimal qualities of several strains and to combine them in a single plant.

It’s possible to determine whether any hybrid plant is sativa or Indica dominant depending on how spaced its bud growth is, its height, the size and shape of its leaves, its odor, its chemical balance and the feelings it produces when used.

As stated, most strains today are usually a mix of Sativa, Indica and Ruderalis. What this means is that by picking a “Sativa strain” you could still experience a CBD-dominant body-high instead of the expected THC-dominant head-high effects. This is why categorizing the strains into these three plant categories doesn’t work as well as it did in the past. The best way to pick a strain is to talk to the people at the dispensary, letting them know what kind of effect you are after, or check the strain reviews online and then find a dispensary that sells the one you chose to try.

It isn’t only important to be able to identify the species of a marijuana plant, it’s also important to know which are male and which are female. Male plants can be identified once they are mature. You will notice racemes, or small flower stalks, form at the base of the flowers. Pollen will also be released once the flowers have opened which is designed to stick onto the pistils of the female plant to fertilize it. In general, male plants tend to develop more rapidly than females and this often makes it easier to identify them.

Although female cannabis plants also form racemes, these are different from those of male plants. They form from both calices and pistils, with each calyx having an ovule onto which pollen from the male will stick. Once pollen is stuck on the pistil, it is then pushed into the plant’s calyx and fertilization occurs. The female plant then produces seeds. These will have genetics from both its parent plants.